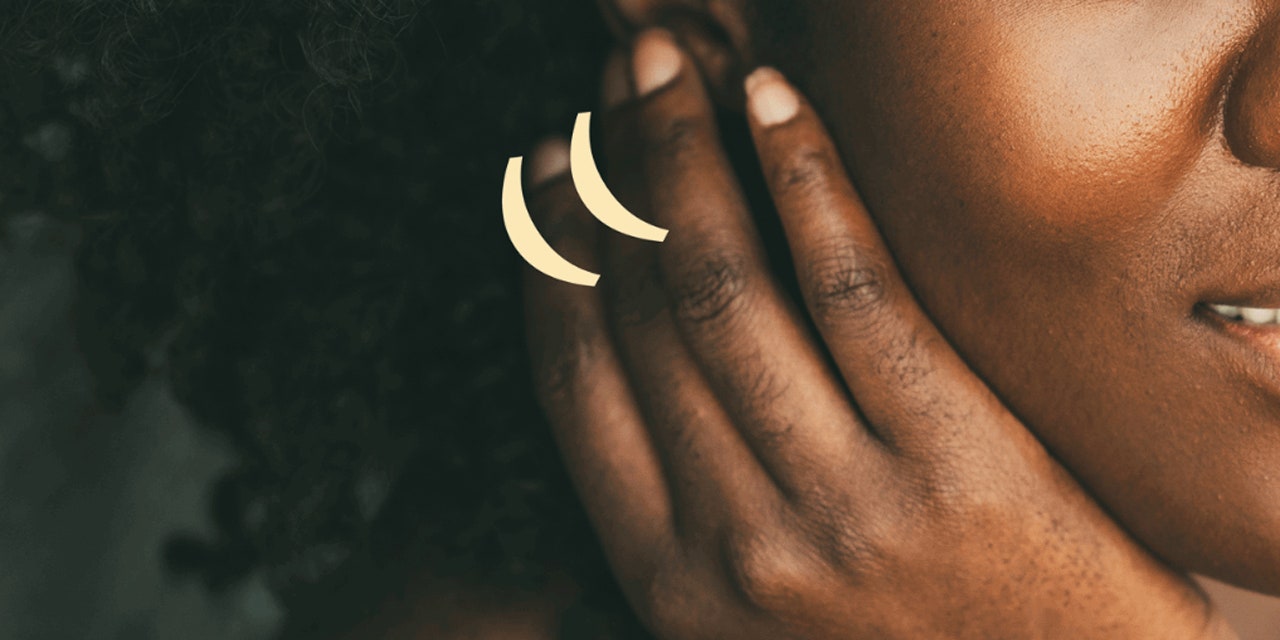 Ever hear a random ringing in your ears that you’re certain is all in your head? Medicine actually has a name for this annoying phenomenon: tinnitus. But what is tinnitus, exactly? Why does it happen? And is there anything you can do about it? Here’s what you should know about this strange auditory experience.

“It’s the perception of a sound without an environmental cause,” Rachel Georgopoulos, M.D., an otolaryngologist (ear, nose, and throat doctor) at Cleveland Clinic, tells SELF.

About 10 percent of adults in the United States have experienced tinnitus for at least five minutes in the past year, according to the National Institute on Deafness and Other Communication Disorders (NIDCD). The exact nature of the sound can vary from person to person, though. It’s common for tinnitus to present as high-pitched ringing, Dr. Georgopoulos says, but people can also hear buzzing, humming, roaring, clicking, hissing, swishing, or a heartbeat-like sound.

Tinnitus can be so loud that it’s hard to hear yourself think, or it can be so soft it’s barely noticeable. It can be present in one or both ears; constant or intermittent; temporary or permanent.

Tinnitus often happens due to age- or noise-related hearing loss.

“I see it in a lot of elderly patients,” Dr. Georgopoulos says. As the Mayo Clinic explains, the number of working nerve fibers in your inner ear gets lower as you get older. Your inner ear contains the cochlea, or the organ that actually allows you to hear, so this kind of decline in function can contribute to hearing issues.

Tinnitus can also be the result of noise-induced hearing loss, per the NIDCD, which occurs when people who are exposed to loud sounds without proper ear protection suffer damage to sensory hair cells in the inner ear that help carry noises to the brain. According to the Mayo Clinic, tinnitus due to short-term noise exposure, like after a music festival, will typically fade. But long-term exposure to loud noises can cause permanent ear damage that leads to tinnitus. This is why people who work in jobs like construction or air traffic control are vulnerable to this issue, Dr. Georgopoulos says.

Tinnitus is also relatively common among service members and veterans, the NIDCD explains. When a bomb goes off, the shock wave of the blast can actually harm some of the tissue in the parts of the brain that process sound.

According to the NIDCD, other possible tinnitus causes include sinus infections, earwax blockages, ear infections, hormone fluctuations (estrogen and progesterone can affect the auditory system), and a condition called Ménière’s disease that is linked with too much fluid pressure in the inner ear.

Tinnitus is also a known side effect of going on or off of over 200 medications, per the NIDCD. These drugs can range from antibiotics to chemotherapy treatments, according to the Mayo Clinic. Although medication-induced tinnitus often goes away, it can stick around in some cases.

Lastly, there’s a handful of people who have tinnitus with no apparent root cause, according to the NIDCD.

Luckily, no matter the cause, tinnitus is often a pretty minor annoyance that doesn’t interfere with people’s daily functioning because they’ve grown accustomed to it, Dr. Georgopoulos explains.

Tinnitus appears to happen most often due to a malfunction along the pathway from your ear to your brain.

Scientists aren’t exactly sure how to explain tinnitus. What they can say for sure is that tinnitus is a sign that something is up with your auditory system, which includes the ear itself, the auditory nerve that connects the inner ear to the brain, and the areas in the brain that process sound, per the NIDCD. That’s why it’s viewed as a symptom, not a condition all on its own.

The most established theories try to explain tinnitus associated with loss of hearing. “We believe that your brain tries to adapt to that hearing loss, and there’s some abnormal reorganization somewhere in the auditory pathway,” Dr. Georgopoulos explains. One popular theory, according to the NIDCD, is that neural circuits may be overcompensating for loss of hearing by increasing the ear’s sensitivity to sound.

Other scientists think that unusual interactions between the neural circuits involved in hearing (as well as other activities in the brain) are to blame, per the NIDCD. Or, these circuits could be compromised when inner ear damage affects the signaling activity between the ear and the part of the brain that processes sound.

Yet another theory compares tinnitus to chronic pain syndrome, according to the NIDCD, a condition where someone continues to feel pain after the initial source of pain (like a broken bone) heals. So, even if the temporary cause (like an ear infection or brief exposure to a loud sound) goes away, the tinnitus can persist indefinitely.

More rarely, tinnitus happens because of an underlying physical issue that actually makes the noise audible to doctors.

So far, we’ve been talking about subjective tinnitus, meaning only the person with the symptom can hear the sound. This is clearly the more common form of tinnitus, experts say. However, an extremely small minority of tinnitus cases can be categorized as objective, according to the American Tinnitus Association (ATA). (The ATA estimates that less than 1 percent of tinnitus cases are objective.) If you have objective tinnitus, a doctor can insert an exam tool like a microphone into your ear canal and actually hear the same noise as you, Dr. Georgopoulos explains.

Potential causes of this are an underlying anatomical abnormality in the region, like a middle ear bone condition, muscle contraction, or blood vessel problem, per the Mayo Clinic.

For instance, if you have objective pulsatile tinnitus, you and your doctor may be able to hear rhythmic, heartbeat-like sounds in your ear. This is usually due to irregular blood flow in the veins and arteries in the head or neck caused by conditions like high blood pressure, atherosclerosis (a narrowing of blood vessels caused by the buildup of deposits like cholesterol), a malformation of capillaries, or a narrowing or kinking of the jugular vein or carotid artery, according to the Mayo Clinic. This kind of tinnitus can also happen due to a tumor or structural abnormality in the brain, according to the NIDCD.

Objective tinnitus often recedes when the underlying problem is treated. In some cases, though, like a vein issue requiring surgical correction, the risk of nerve damage or hearing loss from the operation is too high, Dr. Georgopoulos says. Other treatment options targeting the tinnitus itself do exist, though.

There are a few ways to try to find relief from tinnitus.

The more burdensome a person’s tinnitus is, the more they may benefit from seeking treatment.

Hearing aids are a prime option for those with hearing loss-associated tinnitus, according to the NIDCD. The better you’re able to hear external sounds, the less apparent your tinnitus may be. That’s the reasoning behind trying cochlear implants for severe hearing loss associated with tinnitus, too. These implants communicate directly with the auditory nerve, using external sounds to mask tinnitus, according to the NIDCD.

Sound therapy can help with objective and subjective tinnitus. This relies on wearable sound generators, or small, hearing aid-like devices that emit noises (music, tones, white noise) to help conceal tinnitus, according to the NIDCD. You can also use an ambient sound or white noise machine to make the tinnitus less pronounced, which is especially good for sleeping.

If someone’s tinnitus is persistent and very loud, a newer therapy called acoustic neural stimulation may be most helpful, the NIDCD says. It uses a small handheld device and headphones to deliver a special sound signal that can affect neural circuitry and desensitize a person to the ringing, buzzing, or other tinnitus sound plaguing them, the NIDCD explains.

If relentless tinnitus is making it difficult for somebody to concentrate, relax, or engage with the world, they may also need to address any related mental health issues.

With more severe cases of tinnitus, “It becomes really challenging to talk and to understand other people and to be in loud environments, so it can be really stressful and isolating,” Dr. Georgopoulos says. This is why tinnitus is sometimes linked with mental health issues such as depression and anxiety, the NIDCD explains. In these cases, counseling like cognitive behavioral therapy can be helpful in addition to some of the above measures.

With more time and research, doctors are hopeful that they will have better treatments—or even cures—for tinnitus in the future. “Honestly, we’re still trying to figure out a really good way to treat it,” Dr. Georgopoulos says. “It’s so common and can be quite debilitating.”

https://www.self.com/story/what-is-tinnitus, GO TO SAUBIO DIGITAL FOR MORE ANSWERS AND INFORMATION ON ANY TOPIC

27 thoughts on “What Is Tinnitus?”