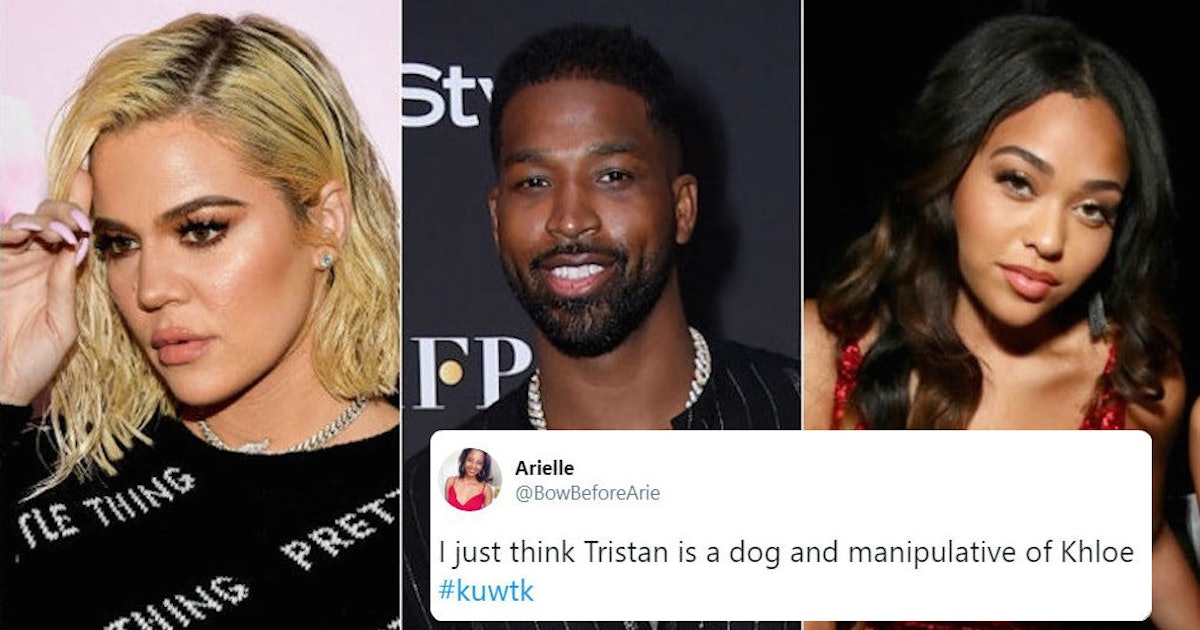 It's been a long four months since the drama between Khloé Kardashian, Tristan Thompson, and Jordyn Woods (and, by default, the entire Kardashian family) went down in the press. The fact that you're reading this post likely means you're up to speed on the dramz, but, just in case, here's the long-story-short version: Way back in February, reports swirled that Thompson and Woods had gotten intimate at Thompson's house party and Woods reportedly didn't leave until 7 a.m. Woods maintained nothing too salacious went down, telling her side of the story — that Thompson kissed her briefly as she was leaving — on an episode of Red Table Talk with Jada Pinkett Smith. But fans have been dying to know all the intricate details of the night. Well, the drama finally went down on the June 23 episode of Keeping Up With The Kardashians, and these tweets about the Tristan and Jordyn KUWTK episode just reveal fans have more questions — because the episode didn't really answer any of the ones we all have (like, are Kylie Jenner and Woods donezo, or what?).

As could be expected, much of the penultimate episode of Keeping Up With the Kardashian's 16th season wasn't actually about the drama with Thompson and Woods, but the buildup to it. Actually, the episode started off with Khloé giving Woods, Kylie, and Kendall Jenner a tour of her home that she was redesigning, which included plans for a luxurious gym that Woods said she wanted to come to work out in all the time. *awk*

After that, Khloé revealed that she'd been dealing with really bad migraines that leave her feeling nauseous and throwing up blood. Kylie convinced her to take a pregnancy test because of her symptoms, but Khloé was only convinced once Kylie and Kris Jenner agreed to take the test with her. Turns out, none of them were pregnant (though, Kris' test malfunctioned, so... who really knows?).

The real drama started going down halfway through the episode when Khloé revealed in a voice-over that Thompson had a couple friends in town for All-Star Weekend and he rented a house through Airbnb for the occasion.

Here's where Twitter started to side-eye him, because why TF did he need an Airbnb and why wasn't Khloé on the invite list for this rager?

After that, the Kardashian sisters begin unraveling all the Khloé and Tristan drama through different phone calls and text messages.

Much of Twitter was annoyed with how Thompson seemed to be manipulating the situation over text message. According to the Kardashians' accounts of Thompson's text messages, he admitted immediately to Khloé that he and Woods had made out, that everyone at the party left while Woods stayed, and that they were super handsy throughout the night.

According to the Kardashians, Woods still hadn't reached out to apologize or tell her full side of the story beyond confirming that they had kissed at some point, leading the Kardashian sisters to think Woods had betrayed them.

Others on Twitter were just convinced Jordyn lied during her interview on Red Table Talk.

It is important to note that we didn't see any actual text messages or hear any phone calls involving Thompson or Woods, so viewers only got the Kardashian sisters' versions of Woods and Thompson's stories.

While many fans were scandalized over the fact that Woods seemingly made out with Thompson and didn't apologize to Khloé, despite all that the Kardashians had done for her, many Twitizens were quick to point out that while the Kardashians may have given Woods more of a platform, she was not a nobody before she met them. Some also felt the sisters were really quick to believe Thompson's side of the story without giving Woods a fair shake.

READ  Le Creuset and All-Clad on Sale at Nordstrom 2019

But things got super intense when, according to Khloé, Thompson began texting her saying that he was contemplating hurting himself. "I can't stop thinking about you and the mess that I've caused," she said, repeating a reported text from him. Elite Daily reached out to Thompson's team for comment on Khloé's claim, but did not hear back by the time of publication.

While some found Thompson's texts to be manipulative, other fans think Khloé was the one in the wrong for broadcasting that reported text message in the first place, because discussion of self-harm, genuine or not, should not be broadcasted for reality television fodder.

In the end, fans are still left wondering how all of the drama ended. The promo for the finale episode of KUWTK showed the Kardashian family dealing with the fallout from the Thompson and Woods drama further, including Kylie seemingly getting emotional over the phone about a conversation she had with Woods and Khloé getting into a physical altercation with Kourtney in a bathroom. It looks intense, and fans can only hope the Kardashian sisters are able to work through this obstacle and come out on the other side an even stronger family unit.

If you or someone you know is experiencing suicidal thoughts, call the National Suicide Prevention Hotline at 1-800-273-8255 or text HOME to the Crisis Text Line at 741741. 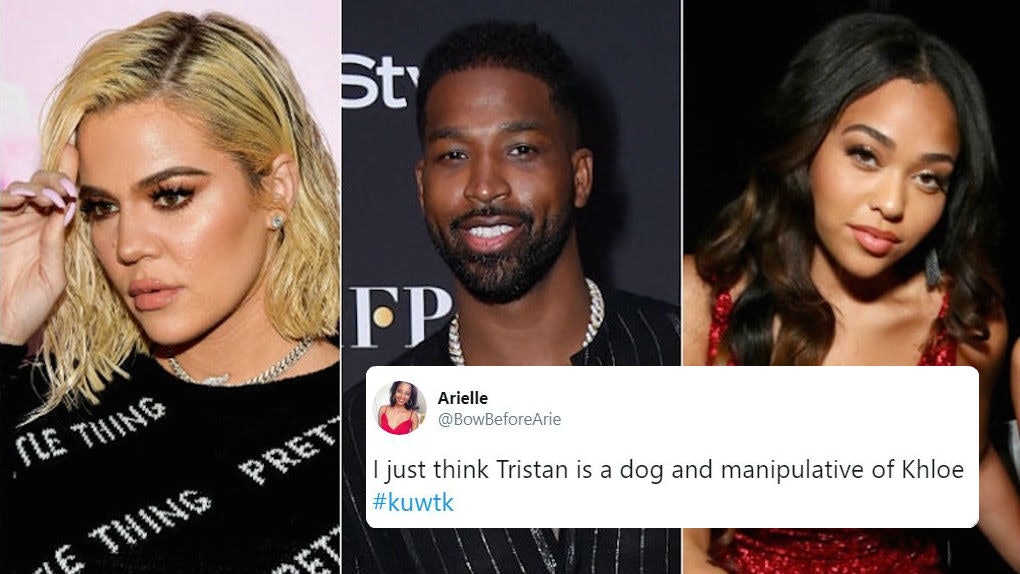 https://www.elitedaily.com/p/these-tweets-about-the-tristan-jordyn-episode-of-kuwtk-are-filled-with-more-questions-18137913, GO TO SAUBIO DIGITAL FOR MORE ANSWERS AND INFORMATION ON ANY RELATIONSHIP TOPIC

35 Helpful Gifts for Hikers, According to Seasoned Trekkers