Whether you are a manager, parent, business owner, educator, or are in a serious relationship, understanding the core differences between a growth and fixed mindset is important. Depending on which circles you are in, the idea of a proper mindset is discussed all the time these days, and growth mindset examples are particularly important.

That is due to Dr. Carol Dweck, who wrote a popular book talking about this concept. One thing that stands out in the book is that, while Dweck talks about these mindsets, many of the examples that she presents are based around learning.

There is nothing wrong with that, but I believe that when we see growth mindset examples that stretch beyond learning new things, we can see what it means to be successful in life.

What Is a Growth Mindset?

Going into Dweck’s book, we’ll find she discussed two distinct mindsets: “fixed” and “growth” mindsets. Those that have fixed mindsets believe that everything from traits, talents, and intelligence is fixed. They’re something that is inherited.

A growth mindset, though, is the belief that the foundation of all of our skills can be developed when we devote time and effort toward them. This, in turn, creates an enthusiasm for learning and resilience when times get tough, which leads to success in the long run. 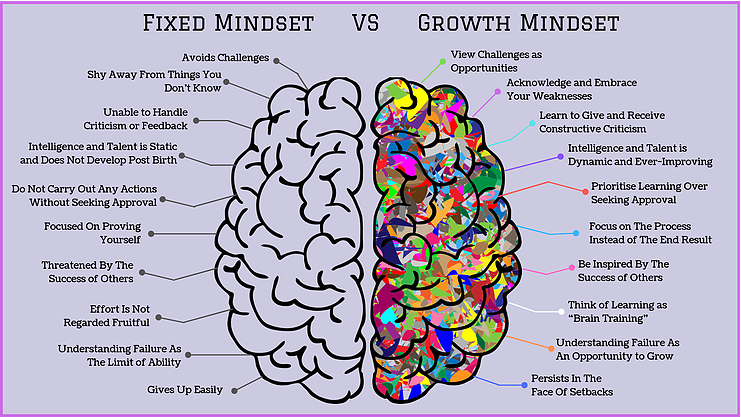 While this all seems straightforward, it’s not always the case. Years later, as Dweck gained more knowledge on this, she looked at how her message was applied.

And the results from others were mediocre—or worse.

Because students and educators alike think about learning and intelligence in different ways, the actions that happen in response could impact learning for everyone, for better or for worse.

For example, one poor application of this information has led to people developing a “false growth mindset.” This could have been a result of improper praise (i.e. “You are so smart.”) from parents or educators, or it could have come from the belief that growth only comes from intense effort.

When Dweck came back to her research, she realized that it’s not always about effort, praise, and persistence. A growth mindset is what I described above, but there is a bit more.

It’s recognizing our fixed-mindset triggers and mitigating them, too. Whenever we face challenges or receive criticism, we can become defensive or insecure. This inhibits our growth. People with a growth mindset recognize what causes this and works around their triggers to identify what can really be developed and improved.

As mentioned above, criticism can lead us to be defensive as our brain can interpret these as attacks on our character and identity. We can run into these scenarios in all kinds of ways, but a common one includes talking to our boss or manager about our performance.

In this scenario, a growth mindset example would be walking into those kinds of meetings with an open, relaxed mind that is ready to receive constructive criticism.

One thing to keep in mind about this is that you and your boss are on the same side. Therefore, whenever there is talk about performance or areas that could be improved upon, know that your boss is keeping your best interests in mind and that this is an opportunity for you to grow and learn.

This can lead to you doing better with your craft.

It doesn’t have to be new tasks specifically. It could be a new path in your life or a new client. Whatever the case is, we tend to experience anxiousness whenever we step out of our comfort zone and have to do something new.

A fixed mindset in this scenario is convincing yourself that you can’t make them happy or that things won’t go well for you at all.

A growth mindset example for this is having the confidence that you’ll make it through. Sure, it’s possible that you will make mistakes, but it’s an opportunity for you to learn.

Another one of the best growth mindset examples is allowing yourself to take on different roles. While it may be similar to doing a new task above, keep in mind that someone is swapping with you. If you’re a manager, you could ensure that someone on your team in a lower position gets that spot.

This leads to a chance for you to keep sharpening your skills in one area while the other person begins developing a new skill set.

This a prime trait for anyone with a growth mindset, but it’s still a good growth mindset example, nonetheless. This example can also be extended into other areas of work and life.

For example, if you are adopting this mindset, this can change who you wish to spend time with or who you want to let in.

If you’re a manager and want a more engaged and motivated group, it’s important that your employees want to be paying attention and improving their skills.

If you want a stronger and better relationship with your partner, they should be someone who is learning along with you, not just in their career but in their understanding of themselves and the relationship.

When hiring other people into your team, make sure that they are eager to learn new things.

Jack Ma was the creator of the powerful eCommerce store Alibaba, but his story is a prime example of a growth mindset. Before he founded that company, he had already experienced a great deal of failure.

He was turned down by Harvard ten times.

And out of a group of twenty-three applicants to KFC, he was the only one rejected.

When he created Alibaba, it took him roughly 25 years to get it off the ground.

Jack Ma has a growth mindset partly because of the sheer resilience that he has, but also his openness to learning as well. The fact that he kept on applying himself meant he learning during and prior to each attempt.

6. Learning to Adapt With the Times

A Lesson From Nike

Nike is one of the top sport shoes company in the world and holds a series of beliefs: innovation, great performance, sustainability, and customization.

Time and time again, we see these through the various shoes that they put out. After all, many customers are coming out satisfied with the shoes they get.

How does this fall into the category of growth mindset examples? Consider their values. In order for a company to continue to retain these values, it’s essential for a business to adapt and change with the times. People’s taste in shoes changes, and as the years go by, we learn that new materials are stronger or can perform better.

A company that wants to stay relevant and satisfy their customers must adapt and remove older ideas and concepts that no longer apply. This behavior is similar to growth mindsets that are constantly evolving as more knowledge is gained.

A Lesson From Nokia

On the reverse side of Nike, we have Nokia. There was a time where Nokia was adaptive in the cell phone market. The fact that any phone they put out was virtually indestructible was something customers remember to this day and loved about this company.

However, how they made phones wasn’t the problem. It was their willingness to adapt. Whether it was stubbornness is hard to say, but refusing to change or adapt is something that a fixed mindset would do. As a result, Nokia can no longer break into the market as it’s been outraced by Android, Samsung, Apple, and Microsoft.

Another growth mindset example can be found looking at Blockbuster. Similar to Nokia, this company has vanished into obscurity as streaming services like Netflix, Hulu and others took over the rental industry.

Though Blockbuster had other issues as well, refusing to change late fees and rental prices also hurt it.

All of this leads back to a fixed mindset and an example of what can happen when we refuse to grow and adapt. Refusing to change in a world that is evolving every day means you’ll get left behind.

9. Venturing on to New Paths

A growth mindset is all about experimenting and doing new things, but it comes with a certain attitude. When someone has a fixed mindset and are performing well on a particular path, most tend to stick to that task and don’t bother branching out.

We see this in children when they think, “I’m really good at this, so I’ll keep doing this so I don’t disappoint anyone.” Unfortunately, this mindset can stick with us as adults. We can find ourselves refusing to change paths or accept new positions.

On the other hand, a growth mindset example for this would be freely exploring and trying new things. Every new path brings experience.

Now that you have some specific growth mindset examples, you will be able to better engage with your own growth mindset. Not only that, but these examples can shed some light on where new decisions may lead us or where past decisions have limited us.

Regardless, what matters moving forward is that we are growing and adapting as best we can and that, ultimately, we never stop learning.

https://www.lifehack.org/895451/how-to-start-journaling, GO TO SAUBIO DIGITAL FOR MORE ANSWERS AND INFORMATION ON ANY RELATIONSHIP TOPIC

Jeff Bridges Gives a Hopeful Update on His Lymphoma Treatment