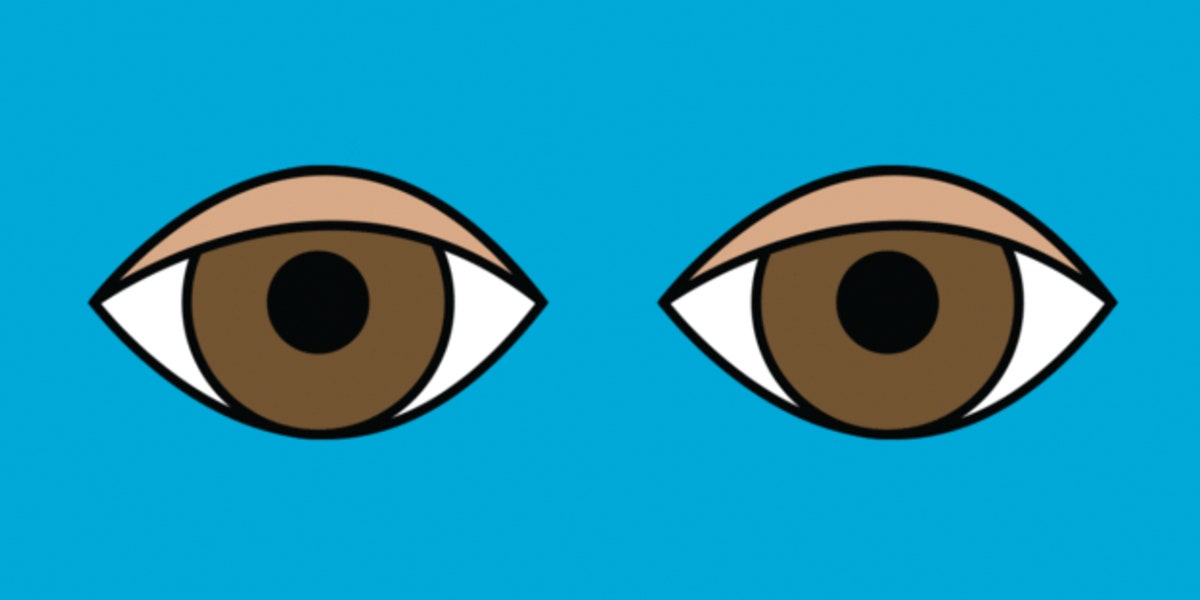 Since you’ve been sneezing since before you understood what a nose was, you know that your eyes automatically snap shut before you can bask in that post-sneeze satisfaction. But…can you sneeze with your eyes open? Or is there any truth to the rumor that some terrible fate will befall your eyes if you try? We asked experts for some answers.

Here’s why we sneeze.

You’re typically inclined to expel those sudden, forceful, germ-filled bursts of air from your nose and mouth when something is irritating the mucous membranes (moist tissues that line parts of your body) of your nose or throat.

“Basically, the body is trying to blow that substance out,” William Reisacher, M.D., an otolaryngologist (ear, nose, and throat doctor) and director of Allergy Services at NewYork-Presbyterian and Weill Cornell Medicine, tells SELF.

A bunch of things can kick off a sneeze, but some of the main culprits include an allergy to something you can inhale, like pollen, mold, dander, or dust, having the common cold or flu, and irritants like air pollution, according to the U.S. National Library of Medicine.

Where do your eyes come in, though?

Experts don’t know why people close their eyes when they sneeze. They do have some theories, though.

One is that you close your eyes when you sneeze to protect those delicate organs from the particles and microorganisms bursting from your mouth and nose, Kelsy Steele, O.D., a clinical instructor in the College of Optometry at The Ohio State Univesity Wexner Medical Center, tells SELF. In theory, that gunk could get into your eyes and cause anything from irritation to an infection. As a result, it’s thought that closing your eyes when you sneeze “could be an adaptive protective mechanism,” Dr. Steele says. If that’s true, your body deserves a hearty pat on the back.

Another theory is that the eye-closing part of a sneeze is simply due to a series of involuntary muscle contractions, Dr. Reisacher says. Muscles in your face squeeze as you sneeze, he explains. (Hence the wonky facial expressions that are part and parcel of this biological process.) “Some of those muscles surround your eyes, so when they contract, your eyes close,” Dr. Reisacher says.

Unfortunately, this isn’t something that’s been heavily researched. It’s hard to know for sure why humans close their eyes when they sneeze, but those are experts’ best guesses.

So, can you sneeze with your eyes open?

It may be possible for you to keep your eyes open when you sneeze, but doctors don’t suggest that you give this a go. If closing your eyes really is a protective mechanism to help you avoid illness or infection, you don’t want to go against your body’s instincts.

Contrary to what you may have heard, trying to sneeze with your eyes open doesn’t mean your eyeballs will pop out of their sockets. However, there is technically a (nearly negligible) chance that you could try this and experience a condition called globe subluxation. This means your eyeballs temporarily and painfully protrude forward far more than they should, basically like an eyeball dislocation.

Globe subluxation can be triggered by trauma, eyelid manipulation, or, in theory, something like forcing yourself to keep your eyes open during an extremely powerful sneeze, Dr. Steele says. But, as she explains, globe subluxation is an incredibly rare phenomenon due to any cause, never mind people sneezing with their eyes open. There aren’t solid numbers on how common this health issue is, but most of the published research is on case studies rather than any kind of large-scale prevalence. This indicates that globe subluxation is more of a bone-chilling health condition to know about rather than something you actually need to worry about day-to-day.

Let’s say you’re an ocular daredevil, though. You can try to fight this reflex if you really want to, Dr. Steele says, and you may be just fine. But, according to the experts, the impulse to close your eyes when you sneeze is strong as hell. You might think you defied it, but your sneaky body may just force you to blink so fast you miss it.

https://www.self.com/story/sneeze-eyes-open, GO TO SAUBIO DIGITAL FOR MORE ANSWERS AND INFORMATION ON ANY TOPIC

32 thoughts on “Can You Sneeze With Your Eyes Open?”