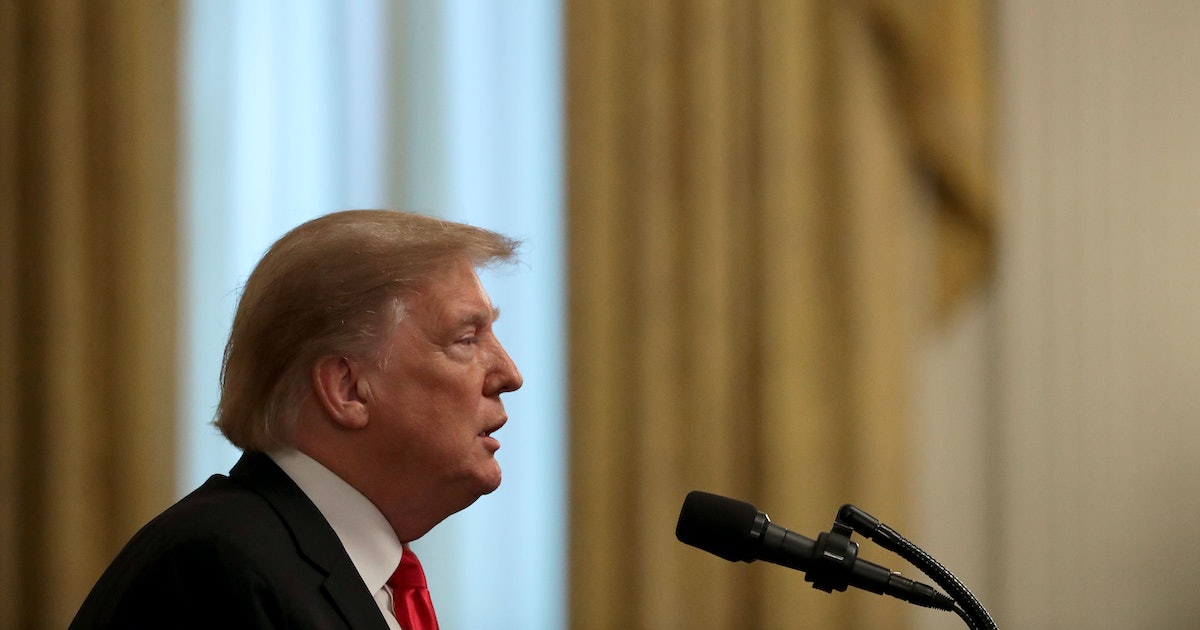 President Donald Trump spends a lot of time talking about what a "genius" he is. Even before running for office, Trump liked to tout his intelligence. Over the years, Trump also claimed that he "went to the best schools," and that he "got good marks." So where did Donald Trump go to college? Before he rose to prominence as a celebrity businessman, Trump attended two different universities, including an Ivy League school.

According to The Washington Post, spent two years at Fordham University — a Jesuit college in New York — before transferring to the University of Pennsylvania. Trump graduated from UPenn in 1968 with a bachelor's degree in economics. During his time at UPenn, he took undergraduate classes at the highly regarded Wharton School of business, though he did not obtain an MBA.

Trump certainly does not play down the fact that he attended an Ivy League college. Back in 2011, Trump defended his intelligence during an interview with Piers Morgan by talking about his time at UPenn.

"I went to the best college: the Wharton School of finance, which to me is like the greatest business school," Trump told Morgan at the time.

The president also seems to enjoy emphasizing just how smart he is during his public appearances. During his first visit to CIA headquarters in January 2017, Trump said he had an uncle who was an MIT professor, and then told the crowd, "Trust me, I’m, like, a smart person."

According to Forbes, Trump routinely claims he graduated "first in his class" from Wharton, but he may have actually graduated without honors. As a 1984 New York Times Magazine profile pointed out, the commencement program from 1968, the year Trump graduated, does not list him as graduating with honors of any kind.

In the past, Trump has criticized former President Barack Obama's academic record. In fact, when Obama was running for reelection in 2012, Trump called Obama a "terrible student," TIME reported, and demanded that the former president release his academic transcripts. But when Trump himself decided to run for president, his former lawyer — Michael Cohen — reportedly sent letters to the high school and colleges Trump attended, as well as to the College Board, warning them not to release Trump's transcripts. According to The New York Times, Cohen provided a record of one such letter he sent to Fordham University to the House Oversight Committee, during extensive testimony about his dealings with the president.

“When I say con man, I’m talking about a man who declares himself brilliant but directed me to threaten his high school, his colleges, and the College Board to never release his grades or SAT scores,” Cohen told the Oversight Committee, per TIME. “The irony wasn’t lost on me at the time that Mr. Trump in 2011 had strongly criticized President Obama for not releasing his grades.”

Fordham University confirmed to the Associated Press that Cohen had indeed sent the school a letter with such warnings.

It is true that Trump spent two years at an Ivy League school, and that he ultimately obtained a bachelor's degree from UPenn. However, despite consistently claiming that he "got good marks" and that he is "really smart," Trump has apparently been keen to keep his academic records out of the public eye.

What's in those records? Only Trump, and his academic advisors, know for sure. But I'm definitely curious. https://www.elitedaily.com/p/where-did-donald-trump-go-to-college-he-doubled-up-18236711, GO TO SAUBIO DIGITAL FOR MORE ANSWERS AND INFORMATION ON ANY RELATIONSHIP TOPIC

1 thought on “Where Did Donald Trump Go To College? He Doubled Up”