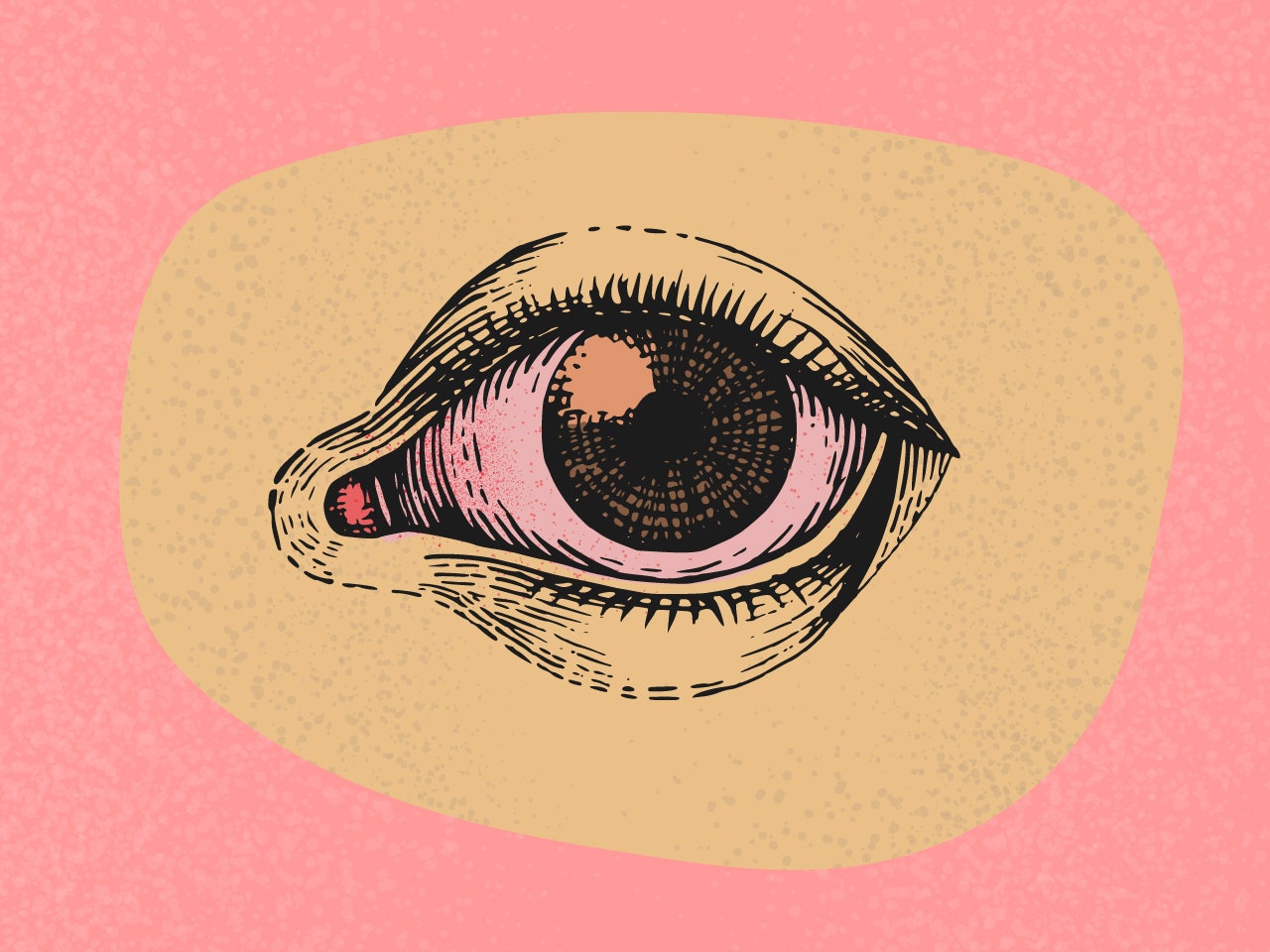 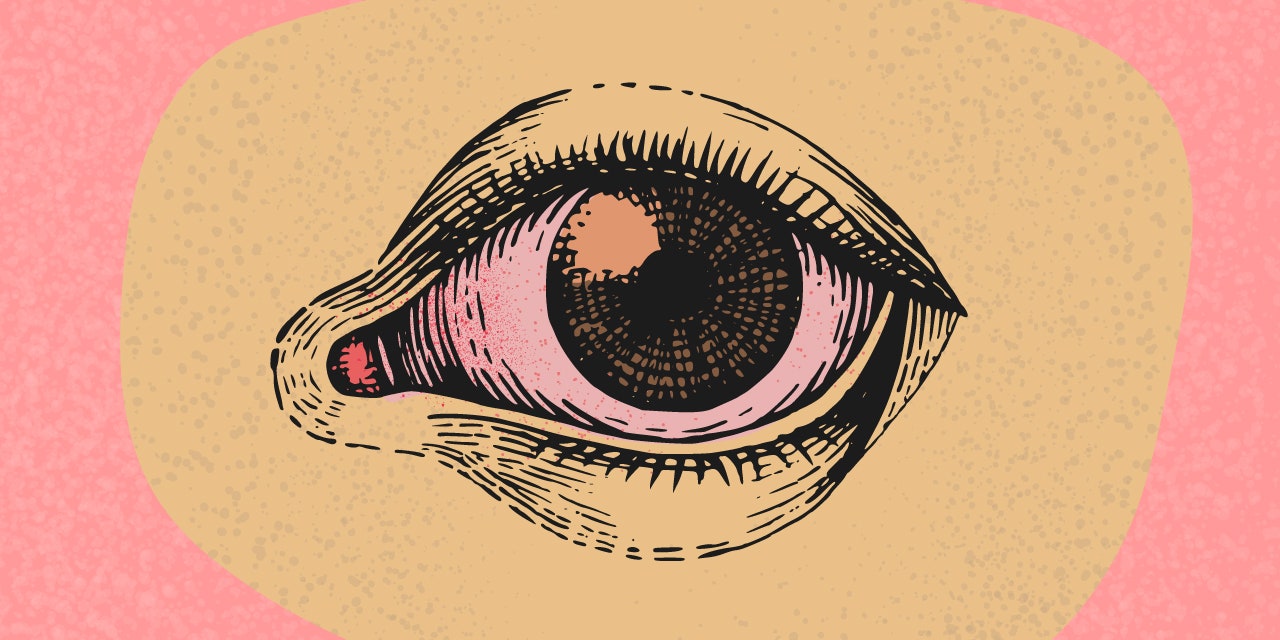 Getting semen in your eye typically isn’t harmful, but it can hurt like hell.

Semen contains components like sugars, enzymes, and acids, all of which can irritate your fragile ocular tissue. Your poor, put-upon eye will react in the best way it knows how to get rid of a foreign substance: inflammation that leads to symptoms like burning, tearing, sensitivity to light, redness, or blurry vision, Matthew Gorski, M.D., an ophthalmologist at Northwell Health, tells SELF.

These symptoms can become worse the longer that semen overstays its (nonexistent) welcome, so you need to get rid of it ASAP.

Rinse out your eye as soon as you can.

Everyone should have a sterile eyewash made of purified water for emergencies like this, Dr. Gorski says. You should be able to find one at any drug store or online.

If you don’t have eyewash handy, use cool, clean water to flush out your eye. A bottle of plain, purified drinking water works great. (Double-check that it’s not flavored or sparkling, we beg of you.) If you have a water filter in your refrigerator, give it a chance to prove its worth in an unconventional way.

As long as your tap water is safe to drink (which it most often is), it’s a fine option to rinse out your eye, too.

To flush out the semen, you could use an eyecup, or a little device expressly made for rinsing eyeballs. If you don’t happen to have an eyecup lying around (we don’t blame you), just use a regular cup or water bottle. Turn your head to the side, then pour the water over your open eye. You can also get into the shower and let the water stream down your forehead and over your eye. (Hold your eyelid open to make this easier.)

Whatever you do, resist the urge to dump soap into your eye. You’re not trying to wash your eye, just rinse it. Adding soap to the situation would basically punish your eyeball even more.

You might want to get tested for sexually transmitted infections.

I know, sounds ridiculous, but hear us out. Your eyes are covered by mucous membranes that could theoretically leave you vulnerable to STIs because many bacteria and viruses in bodily fluids can pass through this fragile tissue, Dr. Berglund explains.

Unless you know that your partner doesn’t have STIs and isn’t sleeping with anyone else, you may want to have a conversation with your doctor. Even if your partner did recently get tested, some STI viruses doctors don’t commonly screen for, like herpes, can be present in semen, so you might want to see your doctor either way. Your eye doctor would be great for this, but a primary care doctor can work, too.

Two STIs to keep in mind in this scenario are chlamydia and gonorrhea. Chlamydia conjunctivitis is an eye infection that happens due to the bacteria Chlamydia trachomatis, which is also behind the more well-known genital infections. (Conjunctivitis means there’s inflammation of the conjunctiva, the mucous membrane that shields much of the front of your eye and inner eyelids.) Symptoms include redness, tearing, and discharge, according to the Merck Manual.

It’s a similar situation with gonorrhea, caused by Neisseria gonorrhoeae bacteria, the Mayo Clinic notes. When this infection affects the eyes, it can cause pain, sensitivity to light, and discharge, but it’s most likely to impact newborns who contract this bacteria during vaginal birth.

Another STI that can show up in the eyes is herpes. Ocular herpes can happen due to herpes simplex virus type 1 (HSV-1, typically associated with oral herpes though it can cause genital herpes as well) and herpes simplex virus type 2 (HSV-2, this often causes genital herpes but can also affect the mouth). (It can also happen for nonsexual reasons due to the varicella zoster virus, which causes chickenpox and shingles, according to the Cleveland Clinic.)

As the National Eye Institute (NEI) explains, ocular herpes can lead to sores on the eyelid and the surface of the eye. It may also cause symptoms of conjunctivitis like redness, tearing, and discharge. (It’s entirely possible to get herpes in your eye without a drop of semen ever touching it, though. This actually happens often in children who first encounter a herpes simplex or varicella zoster virus somewhere like the playground. It’s also possible that you’ve had a dormant herpes simplex or varicella zoster virus in your body for years only for it to rear its head in your eye if you have an immune system issue, the Cleveland Clinic explains.)

You might be wondering about HIV. The risk of HIV transmission from throwing semen (or, similarly, ejaculating it) is negligible, according to the CDC. Yes, if you actually get HIV-infected semen into your eye, that could theoretically raise the risk as it’s introducing a bodily fluid to a mucous membrane. But the CDC notes that it’s “extremely rare” for a person with HIV to pass this virus to someone else by ejaculating into their mouth during oral sex. It’s also extremely rare for HIV transmission to happen because of contact between mucous membranes and HIV-infected blood or body fluids containing blood. Although both of these scenarios aren’t quite the same as getting semen in your eye, they’re similar enough to make it clear that getting HIV from this scenario is incredibly unlikely.

However, if you’re worried because you know your partner has HIV or you think they might, see your doctor as soon as possible and ask about post-exposure prophylaxis (PEP). When taken within 72 hours of exposure, this medication can help lower the risk of contracting HIV.

Be really honest with your doctor so they can run the right tests.

“If your partner has a known infection or you develop symptoms of an infection, you should get checked out and potentially treated,” Dr. Berglund says. Tell your doctor what happened so that they can more quickly narrow down the cause of your symptoms.

One common mode of diagnosis here includes swabbing the eye or gathering samples of eye discharge, then running tests for the presence of different pathogens, according to the Merck Manual. Your doctor may also put a dye called fluorescein into your eyeball to temporarily tint abnormal, infected areas of your cornea (the dome of thin tissue covering part of your eye).

In addition to those methods, your doctor might rely on a slit lamp to get a close-up look at your eye. You may be familiar with this device from regular eye exams; it’s the one you rest your chin and forehead against while your doctor shines a bright light at your eyeball.

You’ll probably be totally fine after getting semen in your eye.

It’s rare to see any major issues arise from this situation, Dr. Gorski says. Sure, winding up with semen in your eye will probably result in some discomfort and make you wonder about the sartorial pros and cons of eye patches, but that’s usually where the trouble stops.

Your symptoms should go away on their own, but if it’s been more than a few hours and your eye still hurts, your vision is blurry, or you’re dealing with any other weird symptoms, check in with a medical professional. Don’t hold back on the truth—a good doctor shouldn’t even bat an eye.

https://www.self.com/story/semen-in-eye, GO TO SAUBIO DIGITAL FOR MORE ANSWERS AND INFORMATION ON ANY TOPIC