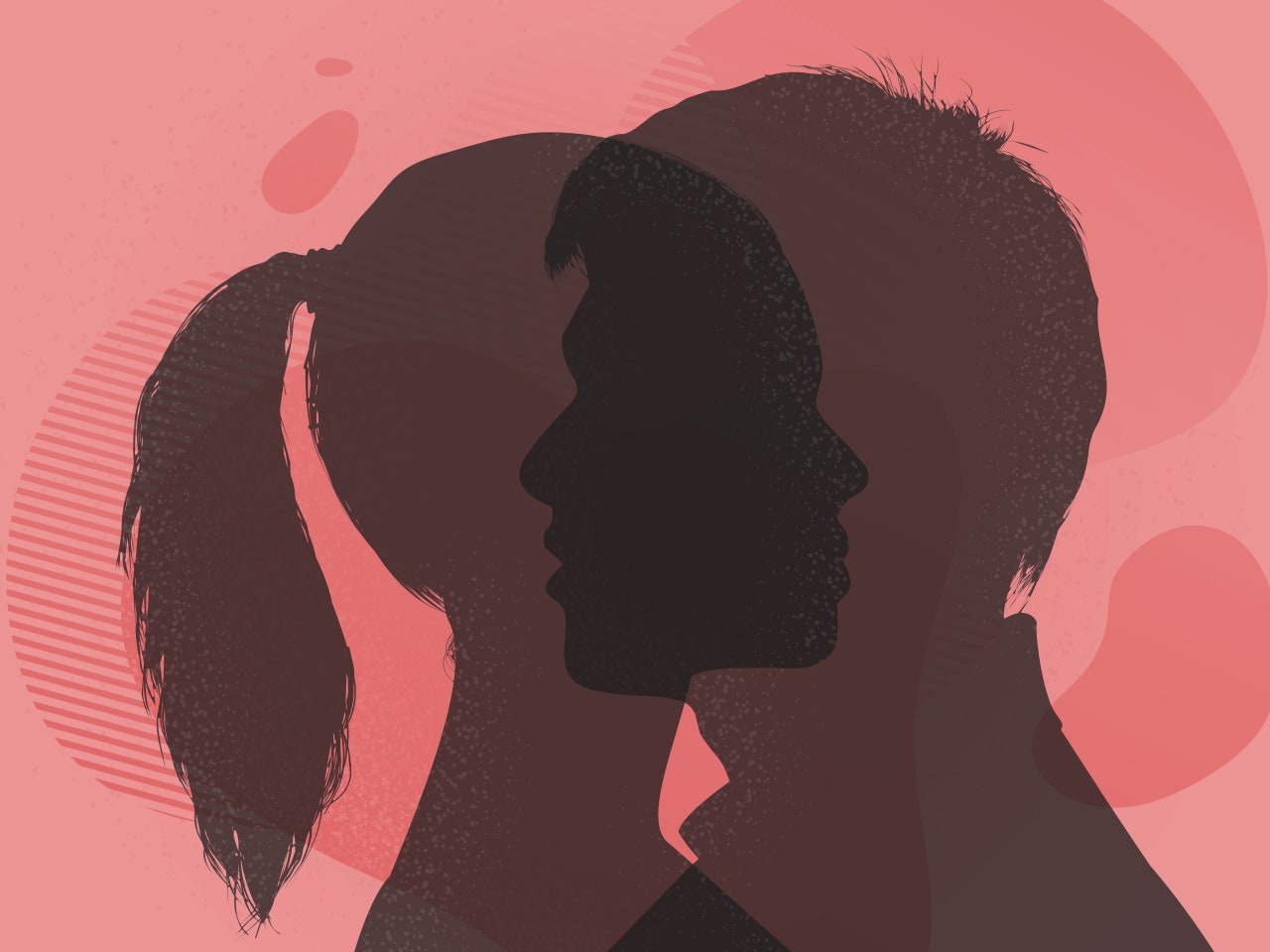 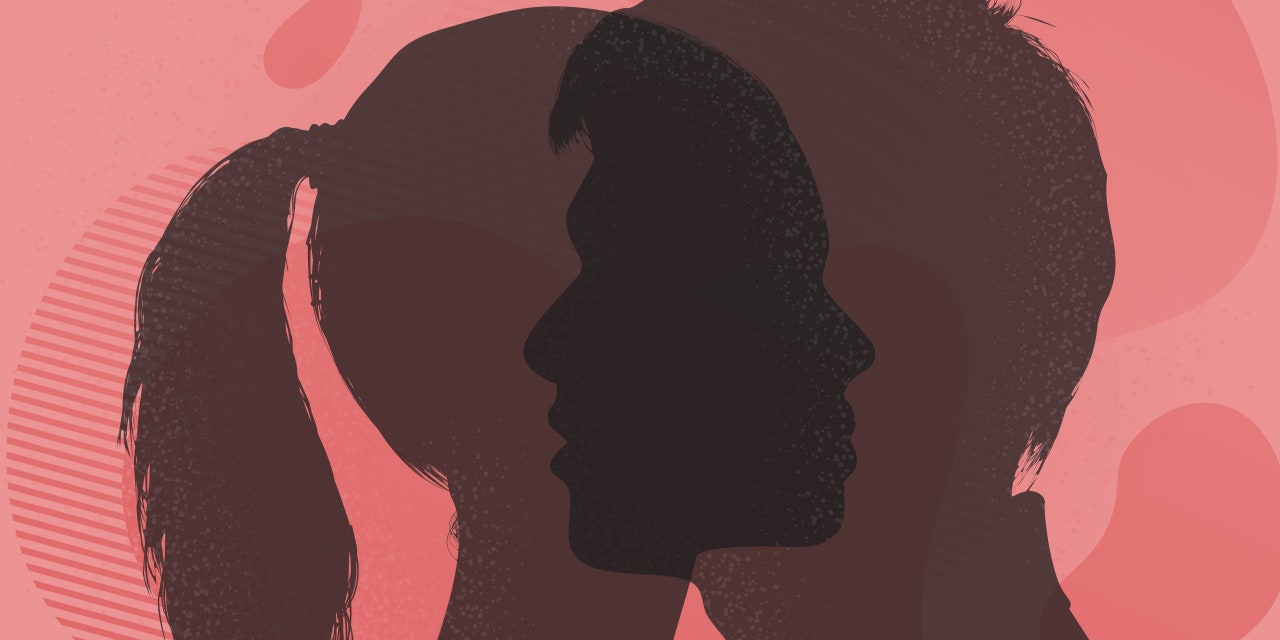 For the second time this week, my husband and I walked out of the house wearing accidental matching outfits. This most recent offense was a striped sweater of exact colors and black Converse sneakers. Other times, it’s been similar plaid shirts and dark jeans. Or, perhaps we’re both wearing our peacoats and stocking hats (though mine does have a fluffy ball on top). It’s a frequent habit that’s so irritating, one of us begrudgingly changes. But I fear that one day we’ll give up and end up shopping for groceries in matching tracksuits.

It wasn’t always this way. When I met my husband in college, we could not have been more different. We grew up in the same town but didn’t cross paths until I was home from college during summer break. Nate, a redhead with fair skin and freckles, could not have cared less about fashion and rotated what he referred to as his “boot of the ’90s” with a pair of tattered Tevas. I had dark hair and olive skin and majored in clothing and textiles with a shopping addiction to prove it. He had a more long and slender figure, while I was curvier in college.

Fast-forward 20 years, and we’re sharing dress socks. Our body types even seem more similar to me these days (maybe because we eat the same foods and sync up our workouts much of the time). And giving up my tanning bed habit means that my tan eventually faded into a paleness that more resembles my husband’s skin tone.

What’s more, we tag-team telling stories, order for each other, and practically have our own language. It feels like we’re aging together and into one another.

This isn’t to say this is necessarily a bad thing, just that it’s a Thing.

In an old study by Robert Zajonc, Ph.D., that’s widely cited when discussing this phenomenon, Zajonc (who was a University of Michigan psychologist) sought to examine whether couples’ facial features appeared to resemble each other more the longer they are married. He asked participants to analyze 12 pictures of couples (they were all Caucasian couples, ages 50 to 60 at the time of the study) taken as newlyweds and again a quarter of a century later.

The results? Participants reported that the couples started resembling each other more over time. Some of the couples in the photographs also answered questionnaires for the study, and the pairs that were voted to have the greatest increase in physical similarity over time also reported greater happiness and similar attitudes, too. (Newer, more diverse research has gone on to show similar findings that support the idea that many couples look and act alike, and more so over time.)

Why is this the case? It’s not totally clear. But researchers have proposed that factors like shared diet and environment or climate could have an effect on how similar a couple looks over time. Also, it’s thought that people often unconsciously mimic the facial expressions of their spouses in a silent empathy and that, over the years, sharing the same expressions may shape the face similarly.

In addition to our looks, it’s also not surprising that our habits and preferences have melded a bit, too: Art Markman, Ph.D., professor of psychology and director of the IC2 Institute at the University of Texas, tells me that, “It’s quite normal for couples who have been together for a while to start to act more alike. When you communicate with someone, your brain spends a lot of time predicting what they will do next so that you can anticipate what they will say.”

As a result, “Your language system starts to tune to the other person in ways that lead you to speak similarly,” explains Markman, who is also the author of Brain Briefs. “This happens at all levels of language from the pitch and tone of voice to the words and phrases you use.” He adds that a similar thing can happen with goals: “There is a phenomenon called goal contagion, where watching someone do something leads you to want to do the same thing you observe. This can lead to similarities in hobbies, preferences in movies, books, and TV shows, and even styles of dress.”

If you had told twentysomething me that I’d currently be bingeing Game of Thrones, I would have laughed. My husband has attended a yoga retreat with me. I went to the Super Bowl with him. We read the same books and swap when each other is finished. And I can often guess—with arguably 95 percent accuracy—what my husband is going to say before it comes out of his mouth. As a couple who never exercised in our younger years, we just ran our first-ever marathon together, which seems to fit this concept of goal contagion that Markman talks about.

It makes sense that we’ve grown more alike as we age—we married young and practically grew up together. Markman notes that “the younger you are when you get into a committed relationship, the less time you have had to develop independent habits. As a result, you are likely to have a lot of shared experience that has shaped language and behavior.”

So, while I’m in a happy and secure marriage, I wonder if a long-term relationship means that I’ve lost part of my own identity.

Markman tells me that being in a long-term healthy relationship means that each of us has an independent identity as a person as well as a combined identity as a member of the couple. And it’s common to experience a tension between feeling like your own person and feeling like a member of the couple, he adds. “At different times in your life, you will feel good or bad about the emphasis on the couple identity, based in part on how you feel about the relationship at that moment,” Markman says. “You certainly want to feel like you are able to make your own choices and that you are not just selecting activities to please your partner.”

In my previous relationship, I felt as if I was always doing something that pleased my partner; but in my marriage, we compromise on things that we both like, which happen to be the same most of the time. As Markman points out, “If you are happy with the activities that you and your partner choose to do, then there is no need to worry about something that is working well.” In other words, there’s no need to fix something that isn’t broken.

Markman does suggest that, depending on our combined level of openness to new things, fresh experiences can help if life starts to feel predictable—and these can be done together or separately depending on the degree to which we’re feeling good about the shared interests.

I may skip Season 5 of Game of Thrones, and I seriously doubt Nate will ever do a yoga retreat with me again. But I will relish football Sundays and my book club for two.

https://www.self.com/story/my-husband-and-i-are-becoming-the-same-person, GO TO SAUBIO DIGITAL FOR MORE ANSWERS AND INFORMATION ON ANY TOPIC