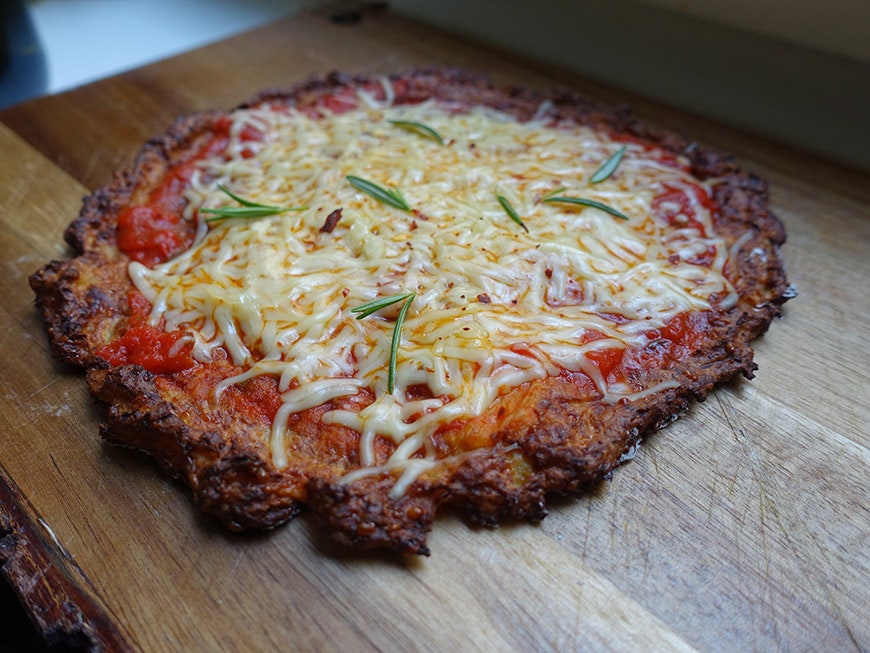 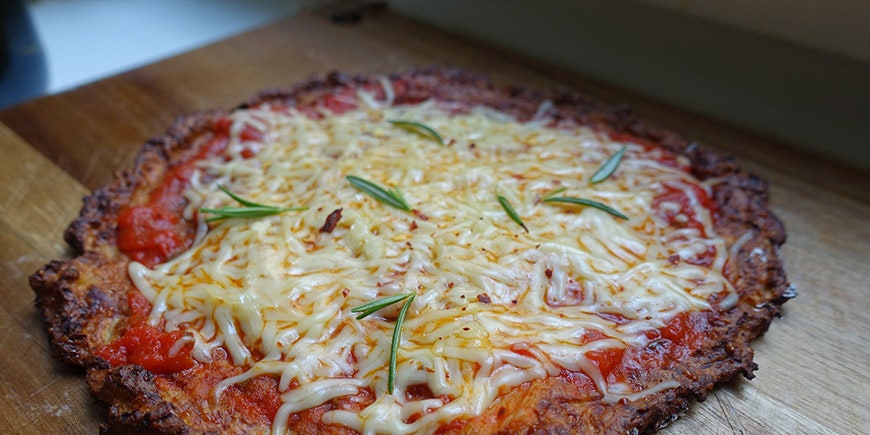 As much as I love the idea of cauliflower pizza crust, in reality, the packaged ones don’t always live up to my expectations. I get why people love the trendy creation—relatively low in carbs and free of gluten, it’s super popular among people who are avoiding either of these things. Personally, I’m not, but I love cauliflower and I’m always interested in trying anything that’s made with it. I’m also always down to find new ways to sneak more veggies into my diet.

The tricky part is that gluten is what gives traditional pizza its structure so that it doesn’t fall apart when you go to grab a slice. And since there is no gluten in cauliflower, pizza crust that’s made from it has a much harder time staying together. Luckily, a few ingredients, like potato starch, eggs, and cheese, and a couple of simple prep and cooking hacks, will ensure that the whole thing keeps its shape.

I tried out a few expert-recommended tricks to make a cauliflower pizza crust that doesn’t fall apart, and they really worked. Here’s everything I did to make it happen and now you can too.

Aside from the lack of gluten, another reason cauliflower pizzas are so prone to falling apart is because cauliflower is packed with water. “They are so full of moisture from the cauliflower that they just cannot keep together,” Abbey Sharp, R.D., food and recipe writer and author of the Mindful Glow Cookbook, tells SELF. Frozen cauliflower packs in even more moisture, so she says it’s best to stick with the fresh stuff when you’re making your own crust.

You’ll want to cook the cauliflower before anything else to better extract the moisture. Chop one medium head into florets, transfer them to a medium pot filled halfway with water, add a generous pinch of salt, cover, and let them steam until they’re fork tender. Set aside and let cool.

2. Blend and squeeze the cauliflower.

Transfer the cooled florets to a food processor and let it run until you have a mostly smooth paste. Then, before you continue working with the cauliflower, you’ll need to squeeze out as much moisture as you can to guarantee your final product keeps its shape, says Sharp. Put the pureed cauliflower in a dishcloth or cheesecloth and squeeze it until you can’t get any more water out. You should have about 1 or 2 cups of cauliflower remaining.

To make my crust, I combined 1 cup of the pureed cauliflower with 1/2 cup of grated Parmesan cheese, 1 egg, 1 tablespoon of potato starch, and 1 teaspoon of salt.

I used cheese and eggs because they’re both great at binding dough together, especially when it comes to cauliflower crust, Sharp explains. Hard cheese, like Parmesan or manchego, will stiffen as it cools, which will give the pizza a little more support. “Egg helps those cauliflower bits stay together,” she adds.

To be sure that my cauliflower pizza wouldn’t fall apart, I also used a bit of potato starch. When I used it to make cauliflower gnocchi, it definitely helped firm up the dough, so I figured it would do the same here.

Combine all of these ingredients and mix until everything is fully incorporated.

4. Heat up the oven and get cooking.

Heat your oven to 400 degrees F and line a baking sheet with parchment paper or a silicone baking mat. Dust the mat with a bit of potato starch so that the crust doesn’t stick. Spoon the cauliflower mixture onto the baking sheet and evenly spread it out into a circle until it’s about 1 inch thick.

Transfer it to the oven and let bake for 20 minutes. Rotate and let bake for another 10, then check on it to make sure it’s not burning. If it’s brown, cover with foil so that you can continue to cook it without burning it. (It needs to cook for a long time to get as much moisture out as possible.) Let it bake for another 10 minutes under the foil. If it seems firm, and you can lift part of it with a spatula without it breaking, it’s probably ready. But if it’s still a little wet or tender, let it cook for another five minutes.

If you do end up burning it a little, don’t worry—mine was darker than I would have liked but it still tasted totally fine.

Throw whatever toppings you like on the crust. I kept it simple by using marinara sauce from a jar and a bit of cheese, but you could totally get experimental with it if you want to. Feel free to pile ’em on, and enjoy your sturdy and delicious homemade cauliflower crust.

OK, so honestly, I wasn’t expecting this to taste anything like actual pizza, but it was surprisingly similar. The cauliflower never really takes on the chewy texture of a great pizza crust, but it’s tender and satisfying in its own right. And the veggie’s flavor is actually pretty mild after being steamed and baked, so it doesn’t overpower the toppings. A hot slice is definitely kind of floppy, but it’s easy to hold, not mushy or greasy, and pretty similar to the structure of a frozen pizza you’d buy at the store. It also firms up significantly as it cools.

All in all, it’s definitely a yummy, veggie-packed, and gluten-free way to satisfy a pizza craving.

https://www.self.com/story/cauliflower-pizza-crust-doesnt-fall-apart, GO TO SAUBIO DIGITAL FOR MORE ANSWERS AND INFORMATION ON ANY TOPIC