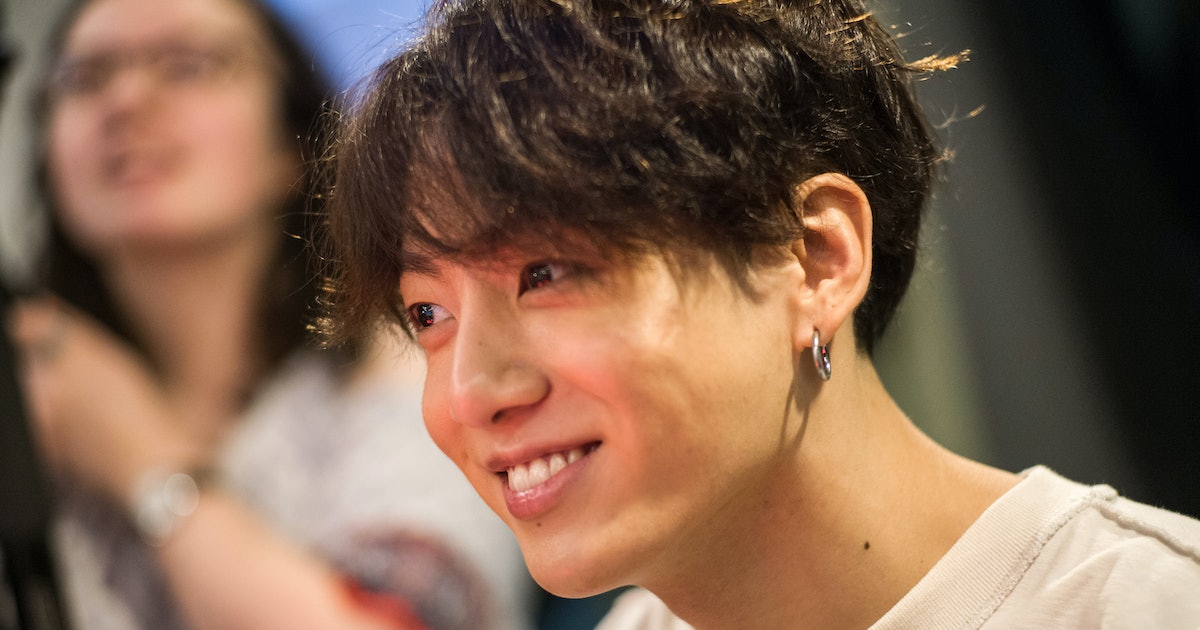 Jungkook is clearly still flying high from celebrating his 22nd birthday over the weekend. The BTS star, whose birthday was on Sept. 1, kicked off his 22nd year by eating a delicious meal that was so good, he could not help but sing about it. BTS' Jungkook's song about eating pork the day after his birthday is a whole mood for whenever you want to eat a big meal and then sleep for hours.

After a very busy weekend that included getting birthday wishes from all of his fellow BTS band members and even an extra special shoutout from Justin Bieber, Jungkook must have really wanted to have a comfortable, low-key day on the day after he turned 22. And honestly, what could be better than chowing down on a big, hearty feast and then turning in for a long nap afterwards? Truly nothing! Plus, BTS just began an indefinite hiatus, so Jungkook can eat and sleep as much as he wants without worrying about performances and press events. That must be the best birthday present of all.

But Jungkook still wanted to share his little moment of serenity with all of his fans, so he took to Twitter to share a silly, improvised song about eating pork belly. As translated by @peachBOY_0613, Jungkook passionately sings about ordering pork belly and encourages his fans to eat some with him. The little tune, which is interspersed with giggles and spans four short videos, ends with Jungkook saying that he is going to get some deep sleep after his meal, and after the song, the singer posted a shot of the delicious-looking feast that inspired his song.

Umm, is anyone else suddenly incredibly hungry and craving pork belly?

As BTS fans already know, Jungkook is no stranger to sharing his intense love for food. Just a few weeks ago, the singer scarfed down some hot dogs and reviewed them in a YouTube video.

And even though this pork belly ditty was clearly just a little bit of Twitter fun, Jungkook has been teasing new solo music recently. On his birthday, Jungkook posted a snippet of a new song, seemingly teasing that fans may get some new solo music from the BTS star. The one-minute-18-second clip features Jungkook singing a soulful, somber ballad of yearning for a lover. Notably, Jungkook is singing in English on the new track, which is a major departure from BTS' largely Korean-language songs. Check out the new song snippet below.

Jungkook posting two surprise songs in a row (even if that pork belly tune was more of a joke) should really excite fans about the possibility of some new music soon. While BTS is currently on a hiatus for an indefinite amount of time, it looks like there may be some hope that the break could allow members to explore some solo projects. Jungkook certainly can't help himself from singing right now, it seems, and fans also interpreted Justin Bieber's winking birthday tweet as a possible collaboration tease. But as for right now, let's just let Jungkook enjoy his sleep. https://www.elitedaily.com/p/bts-jungkooks-song-about-eating-pork-is-a-silly-treat-for-armys-18716830, GO TO SAUBIO DIGITAL FOR MORE ANSWERS AND INFORMATION ON ANY RELATIONSHIP TOPIC