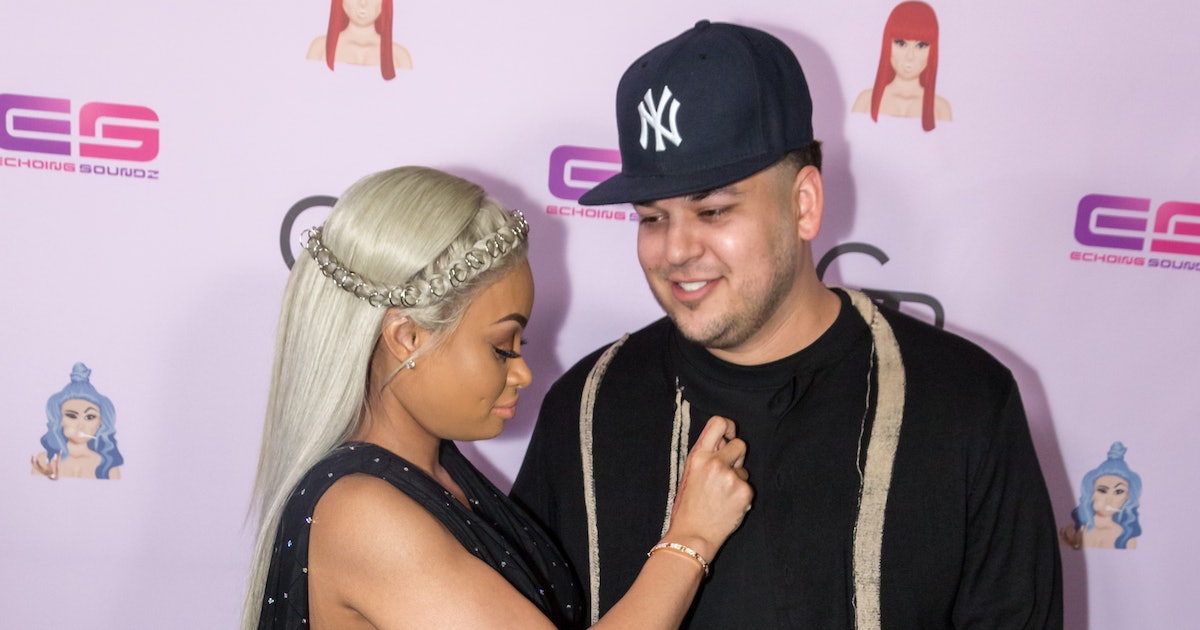 Who can forget the great Blac Chyna, Robert Kardahian drama of 2016-2017? ICYMI, Kardashian and Chyna had an intense relationship that resulted in a reality show, an engagement, a baby, and ended in an explosive breakup. It was a lot, but luckily, it seems like all the drama between Chyna and Kardashian has simmered down for now, making way for them to co-parent their 2-year-old daughter Dream peacefully. Blac Chyna's birthday message to Rob Kardashian was simple yet sweet, and showed they're putting their family first and their past behind them.

Kardashian's 32nd birthday was this past Sunday, and Chyna took to Instagram to wish her baby girl's daddy a happy birthday. She wrote, "Happy birthday Rob," followed by a clover emoji and a smiley face surrounded by hearts emoji. Khloé Kardashian posted a sweet picture of Dream cutting a birthday cake for her daddy before going to see Chyna. It's safe to say the parents have certainly had their fair share of messy breakups and struggles, but it seems like they've put Dream before anything else, which is honorable.

In February 2019, Chyna and Kardashian both tweeted about how they co-parent their daughter, and it was a welcomed update. "Angela and I are both actively co-parenting and there are no pending or active custody cases," Kardashian tweeted after a TMZ report claimed they were going through yet another custody battle. In response to Kardashian's tweet, Chyna quoted it and wrote, "Robert and I only concern is what’s in the best interest of our daughter that we both equally love. Additionally, Robert is a wonderful father to our Dreamy! ☘️"

Chyna and Kardashian began dating in January 2016, according to Us Weekly. Just two months later, the couple sparked breakup rumors after Kardashian deleted all the photos of Chyna from his Instagram account, and Chyna posted a meme about a breakup. In April 2016, the couple surprised everyone by announcing their engagement, and one month, later Chyna posted a picture on her Instagram telling the world they were expecting their first child. Come July 2016, there were rumors Chyna and Kardashian had broken up again after an "explosive fight," which was later shown on their reality show, Rob & Chyna. However, the couple reportedly agreed to work through it, and in November 2016, they welcomed their baby, Dream.

So, while these two may not have always been on the best terms with each other, the same can't be said for how they feel about their baby Dream. If Chyna's birthday shoutout to Kardashian shows us anything, it's that they're on good terms for now, and have left their rocky past where it belongs — in the past. https://www.elitedaily.com/p/blac-chynas-birthday-message-to-rob-kardashian-was-simple-yet-sweet-in-the-best-way-16967131, GO TO SAUBIO DIGITAL FOR MORE ANSWERS AND INFORMATION ON ANY RELATIONSHIP TOPIC