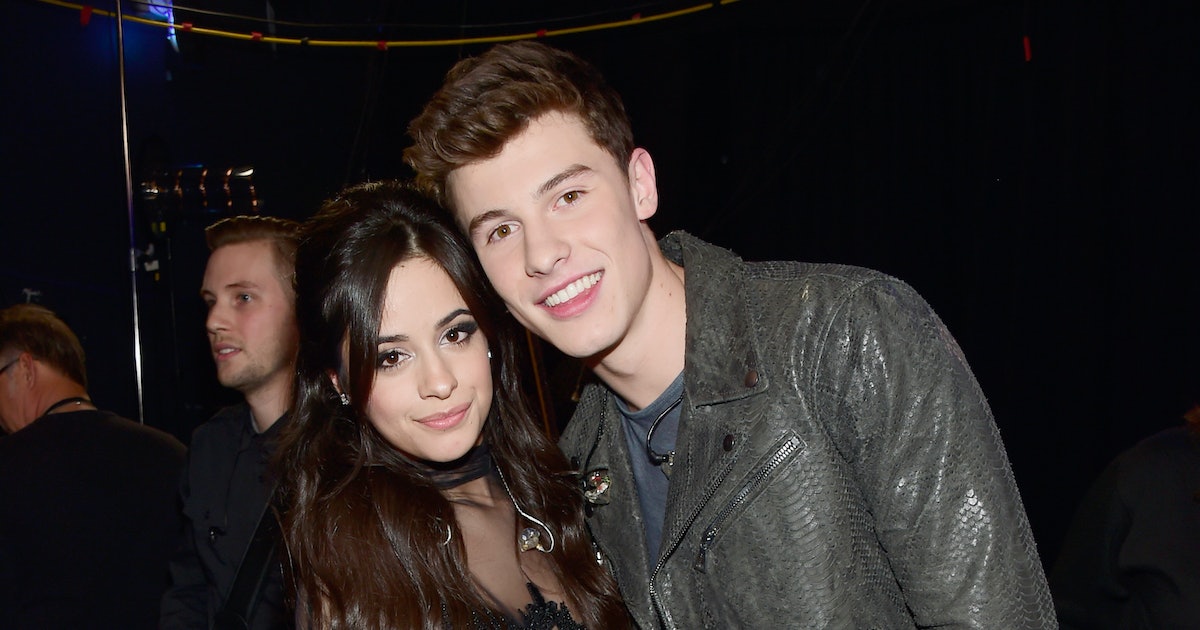 This year on the Fourth of July, the fireworks in the sky weren't the only ones going off. Shawn Mendes and Camila Cabello were spotted holding hands in West Hollywood on Thursday, July 4, according to Us Weekly. The intimate holiday outing wondering has fans wondering, once again, if the regular collaborators are more than just friends. So are Shawn Mendes and Camila Cabello dating? Their body language on July 4 provided more evidence to support the rumor.

According to an insider who spoke with Us Weekly, Mendes, 20, and Cabello, 22, both attended Nobu's 4th of July party. An eyewitness source at the event reported, "They were sitting with each other, facing each other and look very intimate. They left together holding hands."

Fans don't have to only rely on the eyewitness testimony. There's also photo evidence of Mendes and Cabello walking hand-in-hand. It could be a sign that the two singers are officially a couple, or at least Shamila shippers are definitely hoping that's the case.

It's no secret that Mendes and Cabello are close. They just collaborated on the song "Señorita" and released a music video for it on June 21. The song serves as a steamy sequel to 2015's "I Know What You Did Last Summer," which was the last time they worked together.

After the pair first collaborated in 2015, Mendes told Entertainment Tonight that he thinks Cabello is "super talented." He said, "I've never worked with an actual songwriter who I clicked with as well as her."

Mendes' positive feelings about Cabello haven't faltered all these years. In an Instagram live chat for "Señorita," Mendes said, "She is the most creative most fun most empathetic person I know! Working with her is a dream!"

Many fans are wondering if all the professional admiration the Mendes and Cabello have for each other could translate into something more. But, despite the wishful thinking, they both have previously insisted that they're just friends.

In June, Cabello split up with boyfriend Matthew Hussey after over a year together. Mendes previously reportedly dated Hailey Baldwin before she married Justin Bieber and hasn't been linked with anyone since then. So, Mendes and Cabello do seem to both be single and possibly ready to mingle. But, even if they are dating, there's a good chance fans might not know about it right away. Cabello has previously spoken about the importance of needing to keep parts of her personal life private. In March 2018, Cabello appeared on The Dan Wooten Interview podcast and talked about sharing details of her then-new relationship with Hussey. She said:

You know what, I am really, really happy. Like I said, I feel like I’ve never been happier in my life. But I feel like as far as that, I have always been such a private person and I think the hardest thing for me as far as this industry has been letting go of that privacy. I feel like, you know, for my sanity and for the sanity of the people that I care about, you gotta keep some things sacred. I need to keep things mine for them to be special, just to protect that. But to answer your question, I’m very happy.

Mendes and Cabello's July 4 hand-holding may be a sign of their romantic relationship, but fans will just have to wait for them to confirm it to make it official (or not).

https://www.elitedaily.com/p/are-shawn-mendes-camila-cabello-dating-they-were-spotted-holding-hands-18172720, GO TO SAUBIO DIGITAL FOR MORE ANSWERS AND INFORMATION ON ANY RELATIONSHIP TOPIC

3 thoughts on “Are Shawn Mendes & Camila Cabello Dating? They Were Spotted Holding Hands”

11 Netflix LGBTQ Movies and Shows With the Hottest...
6
How to Moisturize Your Face
3
Here’s How To Watch ‘Schitt’s Creek...
3
What are the benefits of tomato?
2

Do you think past relationship secrets should always be kept hidden?

Is Prince Harry Still A Prince? Royals Fans Have A Lot Of Confusion About His Title Now